Mysteries surround a man that lost the majority of his memories and wakes up in a place he does not recognise, but the things get worse when he starts recovering his memories. 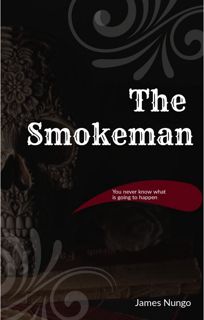 Sitting in a wasteland he has no idea what it is, the man puffs on his cigar and looks up at the red sky. Not far away there is a prohibition sign with an image of a humanoid but deformed being.

On the same side there is another sign with the writing: "Welcome to the Haunted Village".

However, the writing has red strokes that resemble human blood. The man in his all-white suit and tie with long hair looks at the two signs with a fear invading his consciousness.

He stands up and doesn't believe his eyes for a moment until he hears a grotesque sound of something coming towards him. The streets are vacant and the footsteps of the thing approaching him echo in his mind.

The thing begins to growl weakly, letting its voice sound grotesque. The man even though he feels the fear slowly consuming him doesn't let his cigar fall from his beautiful, soft lips. He doesn't remember how he ended up in that place. Footsteps seem to sound in all of the man's directions.

Fear makes him take a long drag on his cigar until he feels his lungs ache from exerting himself too hard.

Suddenly he smells a putrid smell that pulls his viscera into a long, painful vomit that opens his mouth never to close again.

He takes a deep breath and obviously realizes that the smell is exhaled by the thing that is approaching him and with that he is sure that it is very close to him, what is missing is registering in his field of vision.

On the ground he sees a circular white hat with a red ribbon and this brings back one of his recent memories, something that can help him get out of the situation he is in.

He immediately turns to see the owner of the footsteps and to his biggest fright that almost tears his soul eternally he sees a creature with a humanoid shape, however deformed as if it were a creature from horror and science fiction movies.

He can do nothing but start running without consulting the coming of the cruel thing that is naked and has a female structure.

Time later, the man in the suit and tie puts his black mother on the couch when he tries to stand up and realizes that he has just woken up from a fainting spell, however this time he can remember what happened to him.

He looks around and can see nothing but the furniture inside the luxurious house. With his left hand he tucks his hair behind his ears and reaches for his cigar to continue puffing.

The house he is in is huge and he is all alone, which makes him wonder, as well as the fact that the sky is unusually red with a red color that intensifies more and more.

Everything is dark in the house and the only thing that brings in the light is the turned-on television set that is playing the news. The man looks at the screen and can hear a piece of information that makes him very worried, but his worry turns to fear when heavy footsteps sound in his direction.

His heart beats in his chest at an absurd speed that causes him to lose movement for a few seconds before he begins to look for a place to hide from the oncoming creature.

Your breathing quickens and you begin to perspire.

"What the hell is going on here?'he asks himself the question as soon as he manages, running, to reach the wardrobe of a huge room.

The thing that follows him describes the man's path to get where he is. Through a crack he can see the thing that has thin legs, which look more like human legs without skin, and then its entire body, which is skeletal. What helps him to see some of the creature's details is the dim light of the light which like his is red.

The man closes his eyes when he sees the thing approaching his hiding place and intends for an instant to hold his breath so as not to be discovered. He feels in his suit pocket a reserve of cigar and also a lighter, groping with his hand without putting his hand in his pocket.

Suddenly the thing pauses and is silent as if it were scanning the place for a sound that would make his job easier. The smell of the thing is very strong and if the man remains in the hiding place for long enough he might end up vomiting, which would be his end, a horrible death.

The creature begins to roar as if calling its victim to his death. The roaring is continuous and the man's heart races with everything.

"What am I going to do to get out of here?" he asks himself internally and without any answer remains in place waiting for some miracle.

Luckily for him the creature slowly turns to the bedroom door and with lazy steps leaves the room.

The man in the wardrobe stays for a while with his breathing controlled and with his hands over his mouth until he is sure that the creature has indeed left the room and now is the ideal moment to think of a plan to escape and get out of the place alive.

He fearfully opens the door to his hiding place, however the putrid smell of the creature is still strong in the air in the room and this means one crucial thing, exactly, the thing is still around. Suddenly the thing's footsteps sounded with emergency in the direction of the room.

"No, it can't be, what am I going to do?" now he doesn't say it internally, but verbalizes it with the conviction that he can do nothing but surrender to the cruel creature.

She enters the room with all speed and aggressiveness.

The man screams with his hands in his pockets and looking at; the thing.