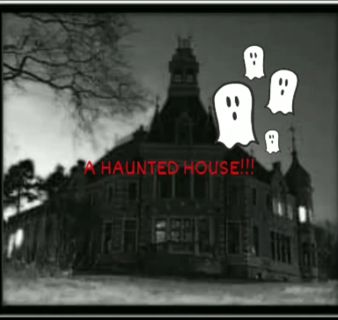 Pitch dark night and its raining cats and dogs, the old man wants shelter until the rain stops.

Not a single living being spotted in the area visible but a house which looks old enough to be called rotten.Doors are closed and not a single sign of existence present there.

The old man is full of terror and fear but is helpless in search of shelter. Knocked the door and a beautiful lady in red dress opened the door with a wide smile on her face.Door was old and broken and created a creek sound. The lady invited him for a cup of tea. The old man who had no other option agreed to that.

They exchanged a warm cup of tea on the table by the window and waited until the rain calmed. The rain slowed and he finally decided to leave turned around and said "THANKS" to the lady and the day ended.

Next morning he went for a walk and passed by the same house and decided to pay thanks to the lady for providing him the shelter he needed plus a warm cup of tea.He knocked the door, but there was no response.He stood there and kept knocking for 10 to 15 minutes when a guy from behind asked him whats the matter and why is he waiting?

Turning around and the old man told about everything happened to him the previous night.

The old man started shivering upon hearing that the same house he had tea in was abandoned for last 50 years and all the members of the house died in an accident.

What made him in fever was the sight from the window,cleared the dust to see inside and saw the same 2 cups on the table in which he enjoyed tea with the lady and waited for the rain to calm....