The known but not recognized: "A student's potential to put an end on failure."

The book tells learners in more details, successful strategies that put an end to failure. 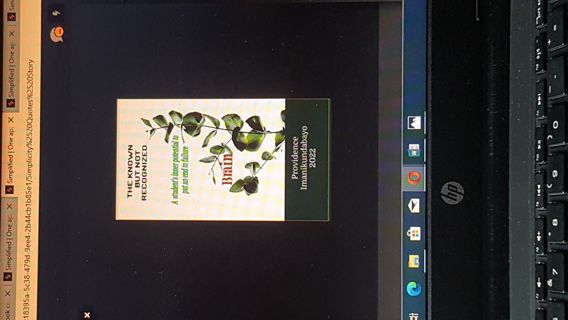 Where, when and why the audience puts a period (full stop, exclamation mark…) on a speech before the speaker does? Who is to blame between the two? Is it a matter of being selective listeners or idiots? Preachers are not always orators; only few of them deserve and public speech deliverers are the same. When the speaker strictly respects the punctuation marks, and the audience does the same, one would say that it is enough. In contrast, in times when one thinks it is enough, that is when it is not; because, there are still more right after the right period.

Should our minds be prisoned in underlined lines and highlighted ones due to writers, preachers and speakers command or point of view?

Wealthy people say they are rich because they have been working hard and saved for years. They are right in one way but wrong in another. Frankly speaking, they know nothing except saving and working hard since they don’t know exactly the source of their wealth. What if everyone saved whatever he or she owned? Would the rich be rich? The answer is that the source of their richness is from the hands of reckless spenders, and the former wouldn’t exist in the absence of the latter. All over the globe there is a sarcastically misunderstood theory of profit; a great loss each of us would regret. Clearly, it is due to prisons of different kinds, some of which people create themselves for themselves and others created by our everyday teachers.

Furthermore, highlighted sentences, underlined ones, full stops, and exclamation marks are all sometimes prisons, and what is not is; “a question mark.” Indeed, light exists because darkness exists, wise are there because idiots are present and wealthy are there as destitutes are there and everything matters in its own values. Staying home is a problem but it is indeed an opportunity to exploit not to play with like little kids. Mature and thoughtful minds always end every speech with a question mark to keep away unfruitful imprisonment.