If you've ever watched a jet plane taking off or coming in to land, the first thing you'll have noticed is the noise of the engines. Jet engines, which are long metal tubes burning a continuous rush of fuel and air, are far noisier (and far more powerful) than traditional propeller engines. You might think engines are the key to making a plane fly, but you'd be wrong. Things can fly quite happily without engines, as gliders (planes with no engines), paper planes, and indeed gliding birds readily show us. 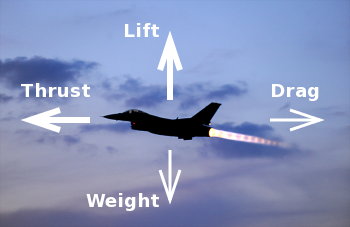 Photo: Four forces act on a plane in flight. When the plane flies horizontally at a steady speed, lift from the wings exactly balances the plane's weight and the thrust exactly balances the drag. However, during takeoff, or when the plane is attempting to climb in the sky (as shown here), the thrust from the engines pushing the plane forward exceeds the drag (air resistance) pulling it back. This creates a lift force, greater than the plane's weight, which powers the plane higher into the sky. Photo by Nathanael Callon courtesy of US Air Force.

If you're trying to understand how planes fly, you need to be clear about the difference between the engines and the wings and the different jobs they do. A plane's engines are designed to move it forward at high speed. That makes air flow rapidly over the wings, which throw the air down toward the ground, generating an upward force called lift that overcomes the plane's weight and holds it in the sky. So it's the engines that move a plane forward, while the wings move it upward.

weight
If you've ever watch
the first thing you'
which are long metal
are far noisier (and
but you'd be wrong.
as gliders (planes w
paper planes
and indeed gliding b
drag
G
G
Grand Huzzler
Follow