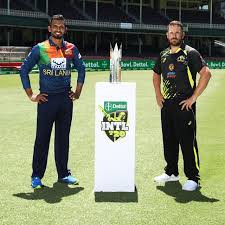 Host's batting first got after a reasonable start courtesy of Aaron Finch and Ben McDermott until the champion leg-spinner Wanindu Hasaranga got better of the Aussie captain as he knocked his stumps over. Then Josh Inglis and Ben McDermott held things together and were maintaining the strike rate then Chamika Karunaratne came and knocked over Josh Inglis for 23 (18), Glenn Maxwell too couldn't last long as Hasaranga proved to be good for him.
Ben McDermott played an anchor role throughout the innings, he took himself to 50 and his team into a position from where the rest of the batters can catapult. Ben McDermott was caught plumb in front of the poles by Karunaratne for 53 (41). After the departure of McDermott, no one stayed at the crease for too long as Sri Lankan bowlers kept Australian batsmen in check till the last minute and they were restricted to 149/9 in their allotted 20 overs.
Ben McDermott was the pick of the batters from the Australian side for his 53 (41).
Wanindu Hasaranga was the pick of the bowlers from the Sri Lankan side for his 4-38-3. He was a touch expensive but he provided Sri Lanka with breakthroughs from time to time.

The total of 149/9 proved to be enough for Australia as Sri Lanka was restricted for a mere 122/8 in 19 overs as the match was reduced by 1 over due to interruption caused by rain.
The top order of Sri Lanka was undone by the top-class Australian bowling attack. Pathum Nissanka was the only one who resisted but eventually he too was trapped by the Zampa-Starc combination. Adam Zampa spun webs around the Sri Lankan middle order and Josh Hazelwood took advantage of it by picking up four wickets.
Sri Lanka were restricted to 122/9.

Adam Zampa was declared Man of the Match for his exemplary performance of 4-18-3.
Australia are now leading the five-match T20I series 1-0.