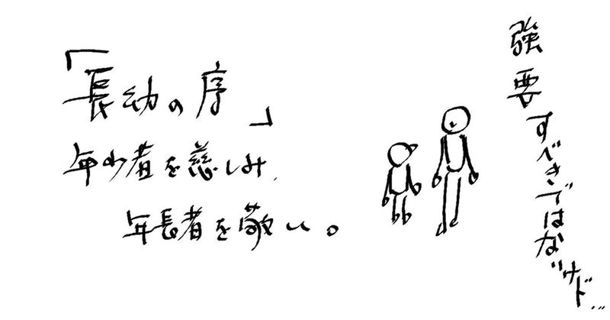 Don't you know what the order of the elder and younger generations is? "No, I don't."

Whenever a young person commits a crime, the Juvenile Law comes into play.

"Juveniles with a bright future should be given a chance to reform.

The human rights lawyer says, "Juveniles with a future should be given a chance to rehabilitate.

I am a graduate of the Department of Educational Psychology, Faculty of Education, Nagoya University. The reason why I despair of psychology is because they only study people with psychological problems. There is a need to study criminals and people who are socially unfit. However, I think that more positive research is more important.

Why is it that there is not much analysis or research done on great people or good researchers? Why is it that when they are done, they are always inconclusive? For example, why is the biography of Nobunaga so controversial?

Isn't it because "it is difficult for an average person to understand the mind of someone who is active on a higher level than himself?

Isn't it because "it is difficult for an average person to understand the spirit of someone who is working at a higher level than him"?

I think about this when I teach entrance exams.

"An ordinary teacher would not be able to understand a child who has passed the medical school of Kyoto University.

And moreover, there is no way they can teach them. I have worked at seven prep schools, cram schools, and vocational schools in Nagoya for 14 years, and I have met many English teachers. At the same time, I had the privilege of teaching many students who took the Kyoto University entrance exam every year. I was also able to guide three students who passed the Kyoto University School of Medicine.

When I compared the instructors with the students, I found that the students were by far the most intelligent. I don't think there is a teacher who can teach Fujii in Shogi. There is no way a grassroots baseball coach can coach Otani. In the West, this would be an acceptable theory, but in Japan, when I say this, people say

But in Japan, when I say this, people tend to say, "How dare you!

"How dare you speak to your superiors!

is a common reaction.

If this tradition of "hitting the nail on the head" continues, all the talented people will leave Japan. And it is only a matter of time before Japan becomes an empty "talent graveyard.