Today I give up trying..

It's about a Son-In-Law(Lin Fan) who has been laying low for 3 years after marriage which caused all believe he is a useless son-in-law.... all his other identities is just him being a God of the Underworld/Music/Medicine/Military/Martial Arts 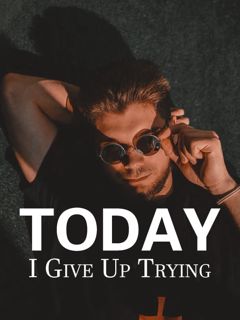 Today I give up trying Chapter 1

Lin Fan finished editing this message, and then sent it out in a group.

In his eyes, an intense color of complexity appeared.

It's been three years.

In order to repay his kindness, he returned from the Global Darkness and joined the Bai family for three years, and during these three years, he suffered from the eyes and ridicule of people around him because he had no money, no influence, and no job.

For Lin Fan, the former Emperor of the Darkness, he had had enough.

Now, he has finally made this difficult decision.

Just at this moment, a text message tone came in.

Lin Fan opened his phone and saw at once that there was an additional message on it.

Business Aunt Luo Lin: "Xiaofan, auntie has finally waited for your words, starting today, the Global Group's eight oil fields in Sabia, Africa, are transferred to your private name, in addition, the Global Group will give 51 percent of its shares to you for free.

Auntie Underground Rose: "Fan, you've finally made this decision! We at the Blood Prison have been waiting for your return for too long. I will immediately inform the Yellow Division that you will become the king of the Yellow Underground!

Military Aunt Neon Phoenix: "Little guy, you're finally getting the hang of it! Why don't you come and be a war god in the military world? Starting today, the Yanhuang Military Department will confer the title of Yanhuang Military Seat on you! From now on, you are the Forest Seat of the Yellow Army!"

The content of this piece of information was absolutely astounding, but after Lin Fan saw it, he just nodded his head, without the slightest surprise or surprise.

On the contrary, his eyes were filled with a hint of intense complexity.

"It's been three years, and originally I just wanted to repay that little girl for saving my life with a steamed bun! But the cruelty of reality and the snobbishness of people have forced me to be that dark emperor again!"

This made Lin Fan's moment seem extremely mysterious and strange.

It was just at this moment.

When the cigarette butt in his hand, just after he threw it on the ground, suddenly from the villa behind him, came a shouting and cursing voice.

"Lin Fan, where the hell are you again? Come in and help us empty the footwash!"

When he heard this, Lin Fan's body stiffened, and a playful smile gradually appeared at the corner of his mouth.

At that moment, he unrestrainedly stamped out the cigarette butt and slowly walked into the villa.

He saw his mother-in-law, Shen Yumei, and his wife, Bai Yi, sitting on the sofa, having just finished soaking their feet.

When she saw Lin Fan walk in, her mother-in-law Shen Yumei was as if she had seen a cat with a mouse, bursting with rage and scolding.

"Hmph! You're such a useless thing, and you even went out to be lazy. You didn't mop the floor, and you didn't wash your clothes.

"Quickly, pour out our mother's footwash!"

Lin Fan was already used to his mother-in-law Shen Yumei's bad attitude, his face was surprisingly calm, and now he picked up two pots of water and wanted to go to the bathroom.

When she saw her husband's face, her wife Bai Yi felt unbearable, and she wanted to help Lin Fan refute something.

She wanted to help Lin Fan refute something. But before the words could leave her mouth, an interruption in the news on the TV set sounded.

The latest news from Yonaguni is that the Global Group, which controls 70% of the global economy, has officially announced that the eight oilfields it just acquired from Sabia, Africa last month will be transferred to a young man from China for free.

In addition, 51% of the company's shares will also be given to the young man for free."

After seeing the news broadcast, both the mother-in-law, Shen Yumei, and the wife, Bai Yi, sucked in a breath of cold air.

That's worth tens of billions of dollars.

The most terrifying thing is the 51% stake in the Global Group, which is absolutely no longer measurable by money.

Even in the world, it is definitely a super big brother level existence.

Her mother-in-law, Shen Yumei, and her wife, Bai Yi, could not even imagine what kind of young man from China could acquire such a large amount of wealth for free.

However, this was only the beginning.

"Breaking news: the Yanhuang Military Department held a press conference, starting today, there will be another person added to the military throne! The name is - Linza! From now on, I, Yanhuang, will have four military thrones!"

This news, again, made Shen Yumei mother and daughter shocked.

The military throne is the most noble title in the history of Yanhuang, and every one of them is an enemy of ten thousand people, commanding one side, resisting strong enemies from outside, and even a god idol in the hearts of all Yanhuang people.

And now, there is one more person, which shows the terror of the Lin Seat.

"A global conglomerate that controls the world's largest economic plutocracy has become the new master of the world! One became the new generation of military thrones, dominating the world and admired by all! Alas, he is a Lin Zhai, my waste son-in-law is also surnamed Lin, but is just a waste who eats soft food, really people are more like people, angry people ah ......".

The mother-in-law, Shen Yumei, said, her eyes not only fell on Lin Fan, who was holding the foot-washing water, but the anger on her face grew stronger and stronger.

"Hmph! Lin Fan, look! Same person, same surname Lin, what kind of person is he, what kind of trash are you! What's the use of my Bai family wanting you to be a lazy, half-hearted person who eats and waits for death every day!"

Hearing this, not only did Lin Fan not get annoyed, but the faint smile on his lips became more and more playful.

He was looking forward to it, if one day.

Lin Fan smiled faintly and shook his head, then took the foot washing water and walked towards the bathroom.

As she watched Lin Fan's back, a hint of complexity and reluctance also appeared on Bai Yi's pretty face.

After all, she was also a man.

The mysterious Huaxia young man has taken control of the Global Group, a giant, and the Lin Seat has shocked Yanhuang, becoming one of the four military seats.

And what about Lin Fan?

It is still eating soft food, relying on her wife to feed her every day, waiting to die.

This day-to-day gap is simply too great to compare.

"Lin Fan, quickly pour the footwash, change your clothes, and accompany me to the reunion later!"

Lin Fan was slightly startled, after three years of marriage, this was the first time Bai Yi wanted to bring herself to a party.

He originally wanted to use his identity as an ordinary person to repay Bai Yi for saving his life with a steamed bun.

As a result, all it brought her was ridicule and endless humiliation from others.

At that moment, Lin Fan entered the bathroom and poured out the foot-washing water, before walking into his room.

Soon, he changed into a casual outfit and came out.

However, when Bai Yi and Shen Yumei saw Lin Fan's clothes, the mother and daughter's brows were furrowed.

"Lin Fan, did you intentionally embarrass Bai Yi? This dress of yours is from three years ago. Like a piece of junk, wearing it out like this, you've disgraced our Bai family."

"This trash, what a disgrace!"

Even Bai Yi was unhappy at this moment, frowning and advising.

"Lin Fan, this dress is too old! You can change the set again!"

Lin Fan was startled when he heard the mother and daughter complain, then stretched his arms and said, confused.

"I think it's great! This is the most comfortable dress, and I usually can't bear to wear it, so it's only appropriate for important occasions."

Is this guy out of his mind?

Three years ago, he had the audacity to say that the ragged clothes that he was wearing three years ago were only suitable for important occasions.

Presently, Bai Yi was so angry that her pretty face flushed red and said in exasperation.

"Yes! You can wear it if you want! Don't blame me if you're embarrassed in front of the whole class of old students when the time comes. Hmph!"

After saying that, Bai gets up in a rage, picks up a handbag, and walks out.

Lin Fan touched his nose and the corner of his mouth curled up.

This dress of his was the most outstanding work of Italy's top fashion designer, Pelle Catherine, which took three years to make.

This is the only one that has a market price of hundreds of millions of dollars.

It was only later that they were told that the dress was a gift from Catherine that they retreated in fear and gave up the idea.

Now Lin Fan did not shake his head and followed Bai Yi towards the door.

"Where are we going now?"

"Clubhouse in Bloom!" Bai Yi didn't even look at Lin Fan and walked straight out of the room.

Lin Fan was startled, if he remembered correctly, this should be a very, very small property of the Global Group in Yanhuang, right?