Is there anyone else of your face in the world ?

Believe it or not, scientists say that statistically, every person has roughly SIX doppelgangers out there in the world. That means there are seven people with your face, including you, out there. 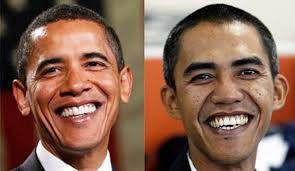 I don’t know about 7 look-alikes but surely at least few do exists. Luckily, I have one in my company, who looks exactly similar, have same height and body proportions. Moreover, he seems to be of around similar age.

Actually, I came to know about him from my colleagues; who was searching for a table during lunch time in office canteen. So they saw him & thought to share that table as nobody else was there on that table. But when they approached near him, then they noticed that he is not me but a look-alike. Well at that time, he kept his hair short while I kept it medium; so they differentiated. Although later on they told me about the incident. So I was amazed and not believed them. But one day he was sitting nearby my department and those colleagues recognised him. They asked me to go and watch yourself.

So I went outside, watched him unbelievably. Just to find out dis-similar features, I watched him from all angles without becoming noticeable to him. I was literally amazed of the similarities he have. He had exactly same hairline, smile, eyes colour, hair colour and even the skin tone. The only difference I noticed was his military style short hair and carries little bit more weight than me.

No matter what, but at least I have one look-alike in front of me. While from other 6, I haven’t met but people told me about another one who used to be the boyfriend of one of my company’s HR. Now she is not in touch of him, so can’t get connected but if I believe her words then I’m a look-alike of her ex-boyfriend.

Thus, I could consider at least 2 dopplegangers of mine.