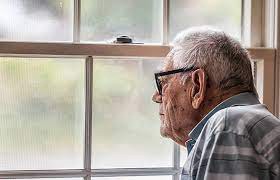 Taking off his glasses, he stared out of the window. The room was dimly lit with the setting sun's crimson hue. All the light filling up the place would soon leave it cold and dark...and lonely. Two birds, perched on the Banyan tree outside, were chirping with their usual tone, unaware of him; unaware of how he envied their love, their ignorant bliss; unaware of how someday one would have to mourn for the other. How can one bear the pain of the parting? His heart clenched at the word. He sighed.

The knock on the door broke him out of his train of thought. Opening the door slightly, a middle-aged woman called for him, “Byom dada? Have you taken your medicine?” A small smile turned up at the corners of his mouth “Kemon Acho! I might be growing old. But never forget that I was once a soldier, and a soldier never forgets anything”. “Yes, yes dada I know that very well.” They chuckled together. “Theeka chi dada, aami aaschi thodi der baad.”

Closing the door, she again left him in his solitude. “Yes, a soldier never forgets anything, or anyone”, he thought. Something popped up in his mind and he got up and hurried off to a corner of the room, which was breathing an even darker air, with remarkable agility for his age. Turning the radio on, the lyrics of a melodious Bangla geet started to float around him. He was engulfed in a wave of memories.

Byomshish Bannerjee was an 82-year-old war veteran who was counting his final days to the dust. Hopelessly tired of the loneliness that came with the demise of his wife Naina 2 years ago, he wanted nothing more than to close his eyes for good now. The only times she was visiting him was in his dreams. It was only better that he shut his eyelids and never opened them again. When his children had left them around 8 years ago to go and live off in some foreign land, it was Naina, his Naina, who had been there for him, and they both had somehow learned to depend only on one another. Crying on each other's shoulders and reminiscing the memories of their children, they had spent the past years in tears of joy and pain, until two years ago, when he had been left to weep alone. A couple of months after she had passed, he had suffered a major stroke. The sons had coaxed him into believing that he needed extra care and thus, saying, “You’ll be well taken Baba”, they had left him here in Shanti Niketan Oldage Home, once again, all alone. He wasn't alone here per se. The people were genuinely nice and they would nurse him back to health whenever he would get sick. But they weren't Naina. Naina was gone. A sob broke out and he couldn't control the stream of tears that began. Oh, how he would give anything to be near her, to hear her sing, to have her take care of him...The radio began to hum-

As the song went on, he slowly climbed to his bed and closed his eyes, hoping to see his wife again. He did not eat that night. The room remained dark and the radio sang till 5:30 in the morning. Neither the glow of the first rays of the morning sun on his face nor the routine wake-up call of the nurse made him open his eyes. Little did she know, he had finally gone to his Naina.