A popular Group known as APC WARDS TO WAEDS AMBASSEDORS is set to Canvas for APC candidates for 2023 Presidential election, the bayelsa State Coordinator of the APC W2W AMBASSEDRS said this in an interview showing that a twenty man committee is ready 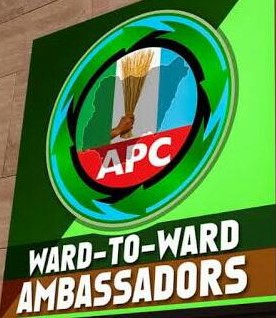 A support group of the All Progressives Congress, (APC) known as ‘Ward-To-Ward Ambassadors’, has said all is set for its executives to be inaugurated towards ensuring electoral victory come, 2023 for the party at both the Federal and states level.

National Wire gathered this during a chat with the Bayelsa state coordinator for the group, Mr Thomas David and the state’s Treasurer, Mr Princewill Ochulor, respectively.

The group’s state leadership described the 2019 governorship election in Bayelsa where the APC candidate was declared winner as a feat well deserved, they however regretted that their victory was afterwards stolen through the backdoors.

The state coordinator, who was particular about the objectives of the group rated the president Muhammad Buhari’s-led APC administration high, saying that the party has in the past six years in office initiated and carried out more empowerment programs than any other party or administration which has been in power at the national level in the last two decades and two years.

The leaders of the support group who promised to take the campaigns for the next APC presidential and governorship candidate of the party in the state to all nooks and crannies, harped that though the party lost its victory at the last governorship polls, their support group, the ‘ward-to-ward ambassadors’ were more than ever willing to partner other well meaning individuals, party faithful and lovers of the initiatives and ideals of the All Progressives Congress in reenacting victory for the party at all levels come the 2023 polls.

National Wire sources gathered further that the duo hinted that already all is set for the inauguration of both it’s national, zonal, states, Local governments and ward executives for the smooth operations of the group in Abuja and at the state’s levels, promising that in the leading months, Nigerians would see them swing into action to ensure victory for the ruling party in the forthcoming general elections.

The Bayelsa leaders of the group said: “We already have the national executive, we also have both the state’s, zonal, LGA and ward executives. But for the forthcoming APC national convention, we would’ve since officially inaugurated our national executives and the various states and LGAs executives”.

“But hopefully, immediately after the forthcoming APC national convention, we’ll Inaugurates all our executives, from the ward to the national levels and the FCT. No government in the history of Nigeria has Empowered Nigerians, especially the youths like the government of President, Muhammad Buhari. Some Nigerians have received more than two million naira as empower grants, and we’re still counting.

“And so we believe that when campaigns officially starts and we continue mobilization drive across the country, the APC again will reenact victory in both Bayelsa and at the presidential offices.”