CIGAR cylindrical roll of tobacco for smoking, consisting of cut tobacco filler in a binder leaf with a wrapper leaf rolled. The Spanish word cigarro, from which cigar is derived, probably was an adaptation of sik'ar, the Mayan term for smoking. 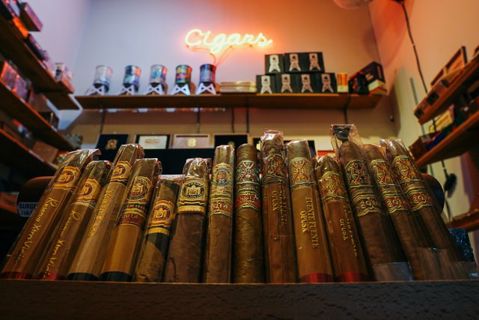 Have you ever wondered where cigars were first produced? It is widely believed that cigars were first produced in Spain. But before cigars became all the rage in Europe, tobacco was needed to make them. Tobacco is indigenous to the Americas, where native peoples have produced it for hundreds of years. It is believed that the Maya of Yucatan peninsula in Mexico and parts of Central America cultivated tobacco, and even smoked it! Tobacco use spread to other tribes, both north and south. It is believed that its first use in the United States was probably among the tribe along the Mississippi. It wasn’t until Christopher Columbus sailed his famous voyage to the Americas in 1492 that the rest of the world came to know tobacco.

It is said that Columbus was not impressed by tobacco or its use among native peoples, but many sailors grew found of the strange plant. Soon it quickly caught on in Spain and Portugal. From there, it spread to France, where the French ambassador Jean Nicot lent his name to the scientific name for tobacco (Nicotiana tabacum). The origins of the word tobacco itself are still suspect, although many believe it is simply a corruption of the word Tobago, which is the name of a Caribbean island. Still others believe it comes from the word Tabasco, a region (and now state) in Mexico.

The first tobacco plantation in the United States was established in Virginia in 1612. More tobacco plantations followed in Maryland soon after. Although tobacco became a popular crop, it was only smoked in pipes. The cigar was not introduced to the United States until the late 18th century. Israel Putnam, an army general who had served in the Revolutionary War, is credited with introducing the cigar to the United States. He had traveled to Cuba after the Revolutionary War and returned with a box of Cuban cigars. Their popularity quickly spread, and soon enough cigar factories were established in the area of Harford, Connecticut, where General Putnam resided.

In Europe, cigar production and consumption did not achieve widespread popularity until after the Peninsula War in the early 19th century. British and French veterans returned to their homelands after years of serving in Spain with their tobacco pipes in tow. Among the rich and fashionable, the favored method of taking tobacco was the cigar. Cigar smoking remains a habit associated with the rich and discriminating of upper society.

Smoking cigars may be a great source of pleasure in your life, but the courteous smoker knows that not everyone enjoys the taste (or smell!) of a good Cuban. With the fervor of anti-smoking campaigns still in full swing, the importance of enjoying a good stogie while not offending others cannot be stressed enough. Simply remember that while you are smoking a cigar, it can be difficult to gauge the smell that others are experiencing. And don’t forget that cigar smokes can leave a mighty strong residue on clothing, furniture, and even the walls! In order to enjoy your stogie without a heavy conscience, learn to become a considerate and courteous cigar smoker.

If you live with non-smokers, try to find a well-ventilated area of your residence where you can smoke comfortably. Although it may be tempting to lock yourself away in an office or bedroom, it’s probably not a good idea to smoke in an enclosed area unless it has a window. Make sure you have easy access to the window. Never smoke in a closed area! You are more likely to inhale the toxic air from your own cigar. If possible, go outside to smoke. Pull up a lawn chair; relax on the porch, or any other open area where you can smoke comfortably. Get as far away as possible to non-smokers, especially children and the elderly. Remember that cigar smoke contains many carcinogens that can be easily inhaled by non-smokers.

If you must smoke a cigar outside your home, remember that the courteous and respectful smoker will only light up where legally permitted. Do no light up in a bar, hotel, or restaurant where smoking is clearly prohibited. The courteous cigar smoker will also make sure to smoke in the company of other smokers. If you are with someone who does not smoke, ask his or her permission. If they agree, be considerate about it. Make sure the smoke isn’t wafting in their direction. Sit near an open window or space. Make sure the air conditioner or current is moving the smoke in their direction! Also, make sure no one around you is eating. The secondhand smoke from a discourteous smoker is a surefire way to ruin a meal.

A courteous cigar smoker will also be aware of their ashes. If you must smoke outside your home, make certain to dispose of your ashes in a safe and appropriate container. Don’t forget that ashes can easily blow away, especially in lower quality cigars. Don’t litter with ashes, and be careful they don’t blow near anyone around you.

Is there a cigar aficionado on your gift list? Wondering how to choose a decent cigar for a friend or loved one? Even if you know nothing about cigars or choosing a good cigar, just learning a few basics can help you sniff out (sometimes literally) a good cigar to give to a friend.

Fortunately, cigars have now entered the mainstream. Once the symbol of the rich and powerful, it’s easier than ever for just about anyone to purchase a good cigar. Of course, you probably won’t be able to buy your friend a box of top-tier Cuban cigars, but you can definitely buy them a good quality cigar that will put a smile on their face.

First, visit your local tobacconist or specialty smoke shop for the best quality and widest selection. Avoid ‘drugstore’ cigars. Although they may be inexpensive and convenient to purchase, drugstore cigars are usually filled with preservatives and generally of poorer quality. They may contain, at minimum, saltpeter, paper, glycerin, and other preservatives and irritants. You should make sure that the cigars you purchase are made of 100% tobacco. If you have any questions regarding the cigars ingredients, ask the salesperson. An experienced and knowledgeable sales clerk will be able to tell you extensive information about the ingredients.

Your local tobacco shop is a good place to shop because you will generally be allowed to smell and touch the cigars. Squeeze the cigar gently. A good quality cigar will give a little when squeezed. The cigar should be firm, with no excessively soft or hard spots. Never buy a lumpy cigar. Look at the wrapper. If you notice any drying or discoloration, best not to buy it. Ideally, the wrapper should be tight and smooth. Inspect the color of the tobacco to make sure it is even. Do this by inspecting the end of the cigar. Some color variation is normal, but if the color changes abruptly, chances are the cigar was not rolled properly. A cigar that is not rolled properly may result in an uneven burning and unpleasant odors.

If you’re not sure how much your friend smokes, choose a longer cigar. Longer cigars tend to have a ‘cooler’ taste

as learning to choose a good single. Here are four tips to guide you in lighting a cigar for the first time.

1. Use cedar matches, if possible. If you prefer to use a lighter, make sure it’s butane lighter to avoid strong odors.

2. Warm the open end of the cigar (aka ‘the foot’ of the cigar) slowly over the flame, without touching it to the fire. Let a black ring form around the end.

3. Place the cigar in your mouth and draw in slowly. Hold the cigar over the flame, about half an inch above it, again without touching. Continue to draw in until the cigar draws the flame. Turn the cigar slowly, spinning it to establish an even burn.

4. Once your cigar is lit, take it out of your mouth and observe the burn you have established. If the burn appears to be uneven, simply blow on the unlit sections to draw the burn, and then take one or two draws from the cigar to reestablish an even burn.