Life of an orphan

Couple bringing up an abandoned child 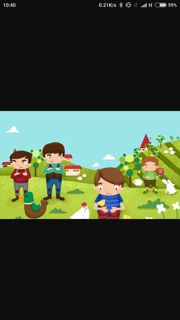 Life of an orphan

Sharanya and her husband Narayana while going for a walk, spotted an abandoned baby boy lying in a bin. The child was very good looking. The couple knew that they cannot have children of their own. So they decided to adopt him.

But when sharanya's older brother Ramachandra did not like this. As soon as he got to know he became furious. Hatred developed between them. He then disowned his sister.

Rachitha was Ramachandra's wife. She was so fond of that child. But she was helpless because of her husband who was very rude, aggressive, cruel, cunning and was a criminal. He cheats others to win. He is money minded.

Sharanya and Narayana decided to stay in a different house and bring up the child. They named him Ajay.

Rachitha was very sad about her husband's behaviour. After two years Rachitha and Ramachandra were blessed with a girl child. They named her Seema.

When Ajay reached 4 years he was put in a school. He was good looking, innocent, sensitive, kind hearted, Helpful, friendly. He was also brilliant, his school assignments were good and was class topper. But he was very thin and weak. He wishes good for others. When anyone suffers, he becomes very emotional and makes a strong decision that he wants to help them. He also helps poor and needy.His adopted parents were very fond of him and use to take a very good care of him and wishes to fulfill each and every desire of Ajay. He was also very helpful to them.

Seema was a friendly and affectionate girl. She and her mother wishes to see Ajay, but they are helpless. Without knowledge of Ramachandra, they use to visit Ajay. Great bonding developed between both families except Ramachandra.

Time flew and Ajay was in class 10. It was time for his board exams. After the exams, the results were announced and Ajay topped the state university with 99%. He got an award. His parents, rachitha and Seema were happy. All of them hugged him.

Soon time came for his class 12 exam. It was time for seema's class 10 exam. Both of them topped.

Time flew and it became time for higher studies. He did engineering in electronics and communication and she did her MBBS and post graduation and then become a famous doctor. Ajay was university good medalist.

Both were in well paid jobs and then fell in love with each other and decided to get married.

Ajay was very large hearted. He is selfless. He want to do civil service and help poor and then do something to the society. Since she was in love with him she also agreed to join him.

Soon their engagement took place. But when Ramachandra came to know about the engagement, he became very furious. He somehow wanted to kill Ajay.

He then arrange goons and gets him kidnapped. The goons gets him tied and then threatens him with a knife. Soon his father comes for his rescue. He spots him and then unties. Ajay was full in shock and was crying. His father then hugs and consoles him. Ramachandra was caught red-handed. He was arrested. Rachitha and Seema were very upset.

Ajay became weak and then fell unconscious. He was then treated by Seema.

Ajay and Seema then got married. His parents and rachitha were very happy.They were living happy and then went to honeymoon trip. They returned and spent time doing social services. They became famous for tgat.They suddenly realised that Seema is pregnant. He took very good care of her. Time flew and the couple was blessed with a boy child. They named him Vijay. Everybody were happy and then felt life was complete.