Ghost agent J "Kim young su" a former military agent that was fired after being framed by his colleagues,he becomes a ghost agent and lives in peace untill his life is turned upside down when he is given a mission to protect a famous celebrity 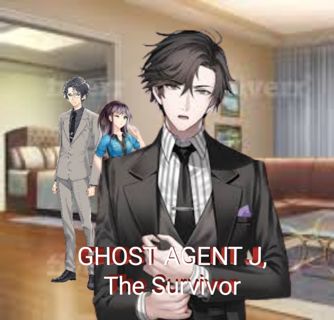 it was a beautiful day with clouds up in the sky and birds singing on the rooftops of the skyscraper hotel in Hong Kong , you would think that the peace and quietness of this Morning hour will remain uninterrupted, but you were dead WRONG!

"MR KIM! your assistance is needed in the living room!"

a man of about 21 year old is seen rolling out of his sweet king size bed with blue blanket and ocean blue pilo with nothing on but his pink red pajamas struck to his waist, if looks were fashion he would look like a parrot but without the peak.

shouted the man to the rude secretary that hung by the door, her face was placed in a scowl directed his way before turning to leave but stopped to give him one more glare that spoke 'Don't be late' and she left without looking back knowing that her work was done. The man got up from the ground in which he had fallen on when he rolled at of his bed and took to looking at the window to see the beautiful view of the Big Great City of China, he removed his pants and placed them on the bed neatly so as not to infuse more steam from the secretary head's and went into the shower. the cold water ran down his face flowing through his abs and down to the middle section that if watched would make any woman swallow, he came out of the shower and went to his dressing room picking a black coloured suit with white middle and black tie, he creased his hair with oil making it slack downwards and went out looking like a bodyguard but could pass out for a handsome business man if given the opportunity, he picked up a silver camelotte watch that had black outing and a lion sheath in the center and walked out of his room.

He trased the lines of the wooden steps that desended into the living room filled with people from left to right doing God's know what, he parpassed all of them moving like a leaf portrayed by Wind in the summer brise and went to stand beside a man dressed in a red undergarment and white top with red designs of a bird at each sides with his hair covering half of his brown coloured eyes, his Boss Park Kyle Soun was a self-absorbed famous celebrity that liked nothing but to know that he is right in every judgement given and loves himself more than his career but sometimes do crazy things in the comfort of his home, MR Park seemed too endorsed in himself to notice him and decided to think about how his life had turn into this recking ball of a furnace filled with crazy situation that could leave an ordinary man Speechless and lost in it

IT all started on his 8th Birthday when his father had come home and told him that he wanted him to see his work place in the military and boy! was he excited for he always wanted to become a soldier like his father and serve in the military. he ran upstairs not minding the disappointing look his father gave him for runing on the steps and took to put on a black blue sweeter with a picture of a white bunny eating grass his late mother had sowned for him when he was 5 and had told him that he would one day grow into it, he was so happy that he jumped up and down when the sweeter had finally fit into his small frame of a body but his mother was already gone by then and could never see the tears and laughter of her son ever again. the years was painful but he got used to not seeing her when he woke up and ran into his parent room calling for his mother or when he fell down and hurt himself waiting for her to come and lick his boo-boo saying it was alright and that the pain would go away if she kiss it. he took his little red school bag and ran down running into the embrace of his father as he was lifted unto his shoulder and carried out into the car to embark on this new adventure.

The journey was long and tiring because he couldn't sit still for a few minutes and always asked 'Are we there yet!' over and over again which led to him falling asleep and not being able to see that there had finally reached the camp. he woke up later to find out that he had slept through the morning in the military camp and ran to find his father, he saw his Father talking with another man who was later introduced as the second in command of the Alpha Team Delta. he decided to look around instead of disturbing his father's serious discussion with the man, he walked around looking left and right as people twice his size passed him left and right but non was surprised of a kid being in the camp for there know who his father was and that no harm should come to him or there deal with him. he decided to follow the group of boys tuning around in a March pass and saw some doing push ups and other form of exercise he never saw before but he was fascinated non-the wise.

The night was near and he could feel sleep starting to pull him under and decided to find his father, he looked left and right until he spotted his father with the other recruit and some higher ups, he jumped up and down calling his father and stopped when he spotted him and justed to come over and that was when danger struck. the ground started to shake uncontrollably with enough force to tear the camp apart, soldiers when runing up and down while some tried to balance themselves. he was scared and started to cry for his father when he had lost sight of him, he looked up when he heard a small cracking sound but all he could see was his father and some soldiers running towards him with fear he could not understand, he saw his Father reached for him and decided to do the same but before their hands could touch he was entraped in total darkness. he woke up three months later to the heart breaking news that his father had passed away in a heart attack because he did not care for his health when his son was in a coma for three months, he cried because that was all he could do he couldn't bring back his mother nor protect his father, he cried until he passed out from tiredness with a hole in his heart.

After that day he stayed in the military camp for he had no other relative that would take an orphaned military child of a chief who was well respected and would cause them trouble so he decided to live in the camp and became a soldier just liked he dreamed of doing, he was a kid but was still able to best almost all the new recruits with how quick he learns things, to the new chief he was the perfect soldier, to the recruits he was a force to be reckoned with, but to those who know his father he was an ordinary orphaned child forced to live in a society of countless war and death who had no say on who or what he is to accomplish. He stayed in the camp for 8 years making him 16 years old and because of his service to the military he was already in the position of becoming a chief of his own unit but many of the recruits hated him and decided to get him fired by stealing the new chiefs precious amulet his daughter gave him on his birthday before she moved to Australia, there took it and kept it under his bed so as to not be quickly detected. the Chief was furious and decided to search the camp for the culprit, Kim was brought out as the culprit and the chief was very disappointed at him and sent him away from the camp scattering his dream.

It was in the late afternoon, the sun was set with no cloud in sight, Kim laid down in the couch in the living room of his father's house now empty of any living thing but him, he thrusted the brown blanket over his head when he heard a knock at the door he really wasn't in the mood of talking to anyone right now and decided to ignore the person but the knock only got louder, he throw the blanket and went to unlock the door, there stood a short lady with black jet hair in a bun, she was wearing a dark red suit with black button and black leggings holding a briefcase that looks expensive in the eye of the poor. he walked in not caring they the house was not hers and plunged herself on one of the couch with her Neels crossed, Kim stood at the door looking at the stranger that just walts into his house looking strict with the black glasses placed in her hair. she justed for him to take a sit as if she in her own home and he did since standing at the door made him look awkward, he took his blanket from the couch and sat down facing the woman or lady 'if god gives' he laid her briefcase on the table and sat back down turning to face him she said

"Good day Mr Kim, my name is Ashley and I work for a secret organisation organised by the government to solve specific missions that can not be done by the civil servants"

she took at a form and placed it on the table, in the form he could see the information about the organisation called 'Ghost' and it's specialist.

"and what those that have to do with me?"

he stated not looking away from the form infront of him,

"it's because the organization has decided to recruit you, we have seen your history in the camp and the unjust you had received and decided you were the best candidate for this"

she stated as she scanned his room and then him looking unimpressed. he looked up and decided to think about it, being a ghost agent is like a soldier but just their identities are hidden without a single trace of who there are or what there are, he needed money and also a work so he decided and signed the paper, he looked up at the lady to see a small smirk on her face and she said'