Spirituality involves the recognition of a feeling or sense or belief that there is something greater than myself, something more to being human than sensory experience, and that the greater whole of which we are part is cosmic or divine in nature. 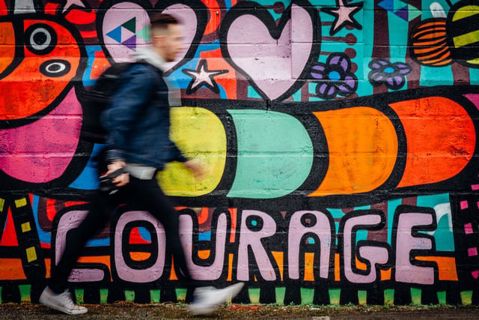 Imagine for a moment that there is no God!

That we are just here. That we come into being and pass away and the rest of the human race after us carries our memories and in some cases our genes.

Is that such a bad thing?Do we cease to have meaning? Cease to love one another any less? Cease to struggle? Cease to care?

Or do we start to just live moment by moment and understand that our actions, our words, our deeds are of our own making and therefore our responsibility.

Be remembered for what you do here! The reward is your life and the world you create, the memories and positve change your life causes.Don’t wait for the next life or heaven. Create it here!

Look at the world around you. There are many things that are wrong and need to change. Stop blaming God for them!

Don’t expect divine intervention! We are the ones that inhabit this planet it is our responsibility. Believe in yourself and the power you have to create change in the world around you. Start small, change happens person by person.

Begin the revolution. Begin believing that God lives inside you and imagine that perfect part of yourself in other people.

Wonder…a sense of wonder. Isn’t that where we all end up when we consider our God, His creation, the works of His mighty hand?

I once had an office mate at work with whom I did this wondering out loud. One day I was talking about one thing in particular that I wondered about when she suddenly burst out with, “Bill, you just wonder TOO MUCH!”

Too much? Such a thought had never crossed my mind before! Am I not supposed to wonder, or had I crossed some maximum threshold and boldly gone where no man had gone before?

I console myself with a line I A.

Of course, I’ve used the word wonder in two ways here: to express curiosity, which is where I start, and to be marveled and astonished, which is where I end up each time. But thinking about our God and His creation; how He works and has worked; what the promise of eternal life in His presence does give us cause to wonder. How awesome is our God!

(Okay, I used the word awesome–which I try not to do, but if it can’t be used in this instance when CAN it be used?)

And to get from that first “curiosity” to that final “astonishment” doesn’t always require thinking about the “nature of the universe” or “what will Heaven be like?”, either. It’s not even necessary for me to look at creation or miracles to attain that state. It happens when I consider His nature—His grace, His forgiveness, and His incredible love. I can get there in a flash when I think about His love for me.

Consider the story of the prodigal son (Luke 15:11-32). If you want to get yourself in a state of awe concerning God, I challenge you to read that story again and then really meditate on what’s going on there. The father is waiting and watching for the son to return. When the son is sighted, the father RUNS to greet him. The father pays no attention to the son’s explanations and suggestions. The son is welcomed back as if from the dead. How awesome is our God who would do that with us! And consider the father’s expression of love toward the son who did not wander but who also did not realize who he already was and what he always had.

I’ve read this story many times, heard many sermons and other references to it and yet, when I read it again and really meditate on it I’m blown away.

There’s another song from Watermark I want to share with you. It speaks of God’s great love, how we often take it for granted, and how it strikes us again and again each time.

Can predict the future, but we can choose which paths that we take. What’s the big deal with people expecting you to do what everyone else does? Mathew verses 7-14 says that there are two paths. One more travelled and one less travelled. You think people would be excited for you to do something different. Belief. So your a bum when you go your own way, but then suddenly your succesful when you make something of yourself.

It’s the dollar that talks soo loudly these days. It’s terribly distracting. Like you’re trying to keep things low profile, but it’s turning up the volume with “Black or White” on. Your parents want you to be quiet. And It’s not like the knocking on the door stops either; With increased success comes increased responsibility. Apparently we’re not running around the Fort Saskatchewan Mall with ripped Ninja Turtle sweat pants anymore. By that I mean kids. – and that’s not a cheap stab at Michael.

We all, always, have something to say about everything. Opinion. Why is it that some people are more stuck on theirs than others. Why do they feel like they have to push it on you? You’ve got life no further figured out than anyone else; However when most of us look at our lives we do think that we’ve got it all figured out. We all think that we are going to cross the finish line in first place. Amazing how most of us aren’t even in the drivers seat. Nobody likes different, until different becomes good. What about being happy for others with where they are at? Money even talks at a time like this. Who said money couldn’t buy happiness? Tell that to someone who is hungry. Is happiness having a full stomach.

It’s Human Nature: We exploit everything, until we either fall, or realize that it doesn’t matter how much we have that it will never be enough. Pride. Sadly, that will keep alot of us going even after we come to that understanding.

Do you remember the time when you looked in the mirror and saw yourself. I was told early in grade school that people are a reflection of eachother. Expectation. Is that why are minds are full of what other people want from us? Why do we always measure ourself against the success and failures of others. What do you think we would look like if we were alone. Would Hair Gel have been invented? What about Nail Polish? Would people know who Louis Vuitton is? What about Versace? Actually I doubt it and I think Louis and Gianni would have to find new jobs.

Believe Opinion Prid
I Don't Believe In R
The Truth About Magi
What I Like To Belie
No Idea.
How To Be A Spiritua
A
A
Ayesha Raza
Follow