Digital currency in which transactions are verified and records maintained by a decentralized system using cryptography, rather than by a centralized authority. 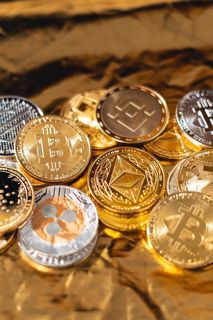 The Role of Miners in Cryptocurrency....

How exactly do you get your virtual hands on different types of cryptocurrency? You can buy it the old-fashioned way, by buying it on an exchange like Coinbase (or using your SoFi Invest® account). You can also trade crypto on an exchange for other types of crypto (for example, using tethers to buy bitcoin). Some blogs and media platforms pay their content providers in crypto.

Then there are the miners. Miners usually don’t pay directly for their crypto; they earn it in various ways: e.g., through a painstaking, high-tech process of verifying transactions on a blockchain network.

Sounds sweet, but mining isn’t cheap. It requires powerful, expensive hardware and lots of electricity, and the competition can be fierce.

Hard Forks vs. Soft Forks and Why They Matter.

Sometimes, a cryptocurrency — whether Bitcoin or an altcoin — forks. The concept is similar to reaching a literal fork in the road, where you have to pick one direction or the other. But with crypto forking is more complicated (of course), as it involves the nodes or computers that store, maintain, and validate the blockchain. Also, there are hard forks and soft forks.

In simplest terms, a fork creates a divergence in the blockchain protocol. A fork typically happens when the blockchain needs an upgrade or update; there’s evidence of hacking or fraud; or a large enough group of miners decide to change the network’s protocol.

Developers might implement a hard fork for a variety of reasons, like correcting security risks found in older versions of the software, to reverse transactions, or add new functionality. For example, in September 2021 the Cardano blockchain forked in order to allow more smart-contract capabilities.

Some memorable hard forks include several on the Bitcoin platform that led to the creation of new crypto (e.g. Bitcoin Cash, Bitcoin Gold), and one on the Ethereum platform that addressed a massive crypto heist by reversing the fraudulent transactions on the old blockchain by forking to create a new blockchain.

Typically, a hard fork requires all miners on the platform to agree to the new update, which in effect creates a new branch of the blockchain.

Polkadot was co-founded by Gavin Wood, also a co-founder of Ethereum, to take the capabilities of a blockchain network to another level. The blockchain’s cryptocurrency is called dot.

In fact, Polkadot operates using two blockchains — the main “relay” network, where transactions are permanent, and a parallel network of user-created blockchains, called “parachains.” Parachains can be customized for myriad uses like building apps (they can even support other coins), and they benefit from the security of the main blockchain.

What differentiates Polkadot from other blockchains is its core mission to solve the problem of interoperability by building so-called bridges between blockchains. Polkadot is not the only system trying to act as a translator to help blockchains talk to one another, but since it was established in 2020, it has become one of the bigger networks in a relatively short time.

USD Coin (USDC) is a stablecoin that runs on the Ethereum blockchain and several others. It is pegged to the U.S. dollar. Meaning that, like the stablecoin tether (USDT) described above, a USDC is worth one U.S. dollar — the guaranteed 1:1 ratio making it a stable form of exchange.

The goal of having a stablecoin like USDC is to make transactions faster and cheaper. While there are questions about whether the tether stablecoin is fully backed by U.S. dollar reserves, some investors believe that USDC is more transparent: its reserves are monitored by the American arm of Grant Thornton, LLC, a global accounting firm. On March 29, 2021, Visa announced the use of USDC to settle transactions on its payment network. As of June 2021 there were 24.1 billion USDC in circulation.

The Role of Miners in Cryptocurrency

How exactly do you get your virtual hands on different types of cryptocurrency? You can buy it the old-fashioned way, by buying it on an exchange like Coinbase (or using your SoFi Invest® account). You can also trade crypto on an exchange for other types of crypto (for example, using tethers to buy bitcoin). Some blogs and media platforms pay their content providers in crypto.

Then there are the miners. Miners usually don’t pay directly for their crypto; they earn it in various ways: e.g., through a painstaking, high-tech process of verifying transactions on a blockchain network.

Sounds sweet, but mining isn’t cheap. It requires powerful, expensive hardware and lots of electricity, and the competition can be fierce.

Binance is one of the world’s biggest cryptocurrency exchanges, and Binance Coin (BNB) is a cryptocurrency token that was created to be used as a medium of exchange on Binance. It was initially built on the Ethereum blockchain, but now lives on Binance’s own blockchain platform.

BNB was created as a utility token in 2017 that allowed traders to get discounts on trading fees on Binance, but now it can also be used for payments, to book travel, for entertainment, online services, and even financial services.

BNB was created with a maximum of 200 million tokens, about half of which were made available to investors during its ICO. Every quarter, Binance buys back and then “burns” or permanently destroys some of the coins it holds to drive demand. In July 2021, Binance completed its 16th burn, of about 1.29 million BNB, roughly equal to $394 million at that time.

Tether was the first cryptocurrency marketed as a “stablecoin” — a breed of crypto known as fiat-collateralized stablecoins. The value of the tether is pegged to a fiat currency — in this case, the U.S. dollar.

Like other stablecoins, the tether is designed to offer stability, transparency, and lower transaction charges to users. Tether is not a speculative investment like some cryptocurrencies; rather it can be used by investors who want to avoid the extreme volatility of the crypto market. As of February 2021, 57% of bitcoin trading was conducted using tethers.

Tether is pegged to the U.S. dollar (which is why the ticker is USDT), and it allegedly maintains a 1:1 value with the dollar, although this claim has come under some scrutiny. According to the company, there is no guarantee provided by Tether, Ltd. for any redemption of tethers; i.e., tethers cannot be exchanged for U.S. dollars.

Solana is a blockchain platform that generates the cryptocurrency known as Sol. One of the more volatile currencies of late, the Sol was trading at about $191.00 on Sept. 10, 2021 — and one year ago it was worth $3.42. What accounts for its growing presence in the land of crypto?

Solana has made strides in decentralized finance and specifically its smart contract technology, which are programs that run on the platform according to preset conditions (like paper contracts, but without the middlemen). Solana was also behind the “Degenerate Ape Academy,” a non-fungible token (NFT) that was launched in August 2021.

XRP was developed by Ripple Labs, Inc. And while some people use the terms XRP and Ripple interchangeably, they are different. Ripple is a global money transfer network used by financial services companies. XRP is the crypto that was designed to work on the Ripple network. You can buy XRP as an investment, as a coin to exchange for other cryptocurrencies, or as a way to finance transactions on Ripple.

Unlike Bitcoin and many other cryptocurrencies, XRP can’t be mined; instead there is a limited number of coins — 100 billion XRP that already exist. Also, XRP doesn’t rely on a complex digital verification process via blockchain the way Bitcoin and others do. The Ripple network employs a unique system for validating transactions in which participating nodes conduct a poll to verify transactions. This makes XRP transactions faster and cheaper than Bitcoin.

Dogecoin (pronounced dohj-coin) is widely known as the first joke cryptocurrency; it was launched in 2013 as a way to poke fun at Bitcoin. Nonetheless, the currency captured people’s attention and a fair amount of investment. In April of 2019, a tweet from Elon Musk indicated he had a positive view of Dogecoin, which further raised Dogecoin’s profile as a legitimate cryptocurrency.

Dogecoin is an altcoin similar to Bitcoin and Ethereum in that it’s run on a blockchain network using a PoW system. But the number of coins that can be mined are unlimited (versus the 21 million-coin cap on Bitcoin).

Dogecoin is also associated with some headline moments in crypto; investors paid the equivalent of about $30,000 in Dogecoin to help send the Jamaican bobsled team to the Winter Olympics in 2014.

Despite its place as one of the biggest coins by market cap, it trades at one of the lowest prices: about 24 cents, as of Sept. 10, 2021.