The systems of codified practices and traditions of training for combat. While they may be studied for various reasons, martial arts share a single objective: to physically defeat other persons and to defend oneself or others from physical threat. 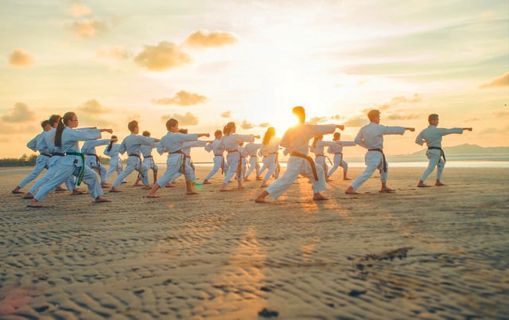 Though Karate is often associated with Japanese martial arts, its true origin dwells in Okinawan combat techniques and Southern Chinese martial arts. It is basically a fusion of both arts and was introduced to Japan only in 1921. During this period, Karate was simply known as “Te”, or hand, as called by the Okinawans. Chinese influence is evident in the original symbol for Karate – the “Tang Hand” or “Chinese Hand.

There were no specified or concrete Karate styles in the early days and simply generalized as Shuri-te, Naha-te and Tomari-te, named after the three cities in which they were formed. Each city had its own methods, principles, system and traditions of Karat

The introduction, popularization and modernization of Karate to Japan are mainly credited to Funakoshi, an Okinawan master, venerably regarded by many practitioners as “The Father of Modern Karate”. Other prominent Karate experts in his time include Kenwa Mabuni, Miyagi Chojun, Choshin Chibana.

Japan began introducing Karate as a subject in schools before the Second World War and soldiers in the army were often trained in the discipline. Competitions and different styles also started emerging as several universities started karate club programs during this period.

The popularization of Karate in the West has its roots in the American military occupation of Japan and Okinawa after the Second World War, and Japanese immigration to the United State

Sometimes one would see references to ‘hard’ style and ‘soft’ style martial arts. To many non-martial artists, these terms may be puzzling. In North America, these terms are used to classify martial art styles into two main categories. Japanese/Okinawan karate and Korean tae kwon do are generally referred to as hard styles. Movements in both karate and tae kwon do are often linear with their forms (traditional sequence of set moves) performed with crisp movements. Chinese kung fu styles are usually referred to as soft styles. The circular motions of kung fu forms give them a more visually graceful or softer appearance especially when many of the movements flow from one to another. Even Korean kuk sool won which is sometimes referred to as ‘Korean kung fu’, is often classified as a soft style since its movements are also more flowing than the stop and go of tae kwon do or karate. This is not to say that hard styles such as karate or tae kwon do are more powerful martial arts than kung fu and other soft styles. The term ‘soft’ is a bit misleading because the power from circular kung fu moves are often hidden. Circular moves can generate just as much power as linear on.

The terms hard style and soft style came as a result of the evolution of North American martial arts competitions, particularly in forms divisions. For many years, open karate tournaments which allowed all martial arts styles, had competitors from different martial arts backgrounds compete in the same forms divisions. All equivalent level competitors, whether they used a Japanese/Okinawan karate kata, a Korean tae kwon do pattern or a Chinese kung fu form, competed together in the same divisions. This provided a nice martial arts showcase for spectators especially at the bigger tournaments. However, some competitors and judges considered divisions with combined styles to be too complicated. For example, judges who were familiar with only Japanese or Korean styles had a difficult time scoring competitors performing Chinese kung fu forms. Sometimes competitors from different martial art styles felt that judges were being biased against them. Judging a hard style form against a soft style form was often like trying to compare apples to orange

To help resolve these issues, many of the larger martial arts tournaments expanded to have separate divisions for hard and soft styles. This was a way to equalize things and add some more fairness to all competitors. The largest tournaments went another step ahead and further separated Japanese karate stylists from Korean tae kwon do stylists by putting them into different divisions too. This still left many kempo stylists up in the air because their particular forms have both hard and soft style elements since their movements are both linear as well as circular. Some promoters of large tournaments decided to accommodate kempo stylists by adding in separate forms divisions just for their style too. Of course many smaller local tournaments have not been able to offer separate hard and soft style divisions for martial arts forms competitors mainly because of financial budget restrictions. The terms hard style and soft style are used only in North America and parts of Europe since these are the only regions of the world that have open martial arts competitions. Martial arts competitions in other parts of the world such as Asia are generally restricted to certain specific styles only.

Before Jackie Chan, Jet Li, Steven Seagal and Jean-Claude Van Damme, there was Bruce Lee. In a way, it is a real shame that many of today’s generation of action film fans have never been exposed to Bruce Lee because he was perhaps the greatest martial arts action hero of all time. His martial arts on film may not have been as fancy as say Jackie Chan’s or Jet Li’s but his on screen ferocity and charisma are unequalled. Even more important was the impact on martial arts that Bruce Lee had which still endures today even over 30 years since his passion.

Bruce Lee always considered himself a martial artist first and an actor second. As a martial artist, he was way ahead of his time in developing his own style of martial arts he called jeet kune do. His martial arts incorporated the most practical techniques from various combative disciplines as he moved away from the traditional and Classical.

respected by other prominent martial artists like Jhoon Rhee, Chuck Norris, Ed Parker and Joe Lewis. His name was inducted into the prestigious Black Belt Hall of Fame twice, once while he was alive and the other after his death. These are honors that no other martial arts action hero has ever come close to. Martial arts schools in North America enjoyed a huge growth in enrollment because of Bruce Lee.

North America got an early glimpse of Bruce Lee when he played Kato in the Green Hornet television series and a bit role in the movie Marlowe. He went to Hong Kong and made a few films like Fists of Fury (called the Big Boss in the Asia market) and the Chinese Connection which made him a huge star in Asia. Bruce Lee also wrote, directed and starred in his own movie production called the Way of the Dragon which featured perhaps one of the greatest martial arts fight scenes ever. This scene took place in the Roman Coliseum and was with Chuck Norris which gave Norris his first film start. It was Enter the Dragon that broke him to North America. Unfortunately, he died tragically at the age of 32 in 1973 before he was able to witness the success of that movie. At the time of Lee’s death, he had completed the fight scenes for another movie called Game of Death which featured basketball star Kareem Abdul-Jabar, who was actually one of his martial arts students. Other students of Bruce Lee included actors Steve McQueen and James Coburn. Game of Death was completed with look-alike actors later o

One of the most significant contributions Bruce Lee made is that he opened the door for other Asians in the entertainment industry worldwide. He was the first Asian to achieve any significant success in the North American entertainment scene. He became a star in North America and the rest of the world by playing heroes rather than past stereotype roles for Asians such as like servants, gangsters, laundry workers or other ‘pigtail coolie’ characters. On an even greater scale, Bruce Lee gave Asians, particularly the Chinese people worldwide, a reason to be proud. Bruce Lee influenced them to be confident in pushing forward to achieve their goals no matter.

Once you’ve decided that you want to start training a martial art, you’ll need to decide which one is best for you. Of course, your choice might be dictated by the schools available in your area, but if you’re lucky you’ll have the choice of at least a few different types. There are many different types of martial arts (and even variations within the basic types) so it’s important to make sure that you research the techniques and features to find the best fit for your lifestyle and needs. This general explanation of the six most popular styles in the United States can help you get started on the decisions.

It’s also important to note that there are as many interpretations of the martial arts styles as there are instructors. Students also interpret the class differently than other students in the same class, so other people’s opinions are not always the best determiner of what style you should pursue. While you are trying to find the martial art that’s right for you, it is helpful to also try a few classes to get a fee.

Karate can be translated as “empty hand” which means that it is a martial art performed without weapons. While the history of Karate is somewhat vague, its ancient roots have been traced back to China in the 5th century B.C. The more modern form of Karate began in Okinawa, Japan during the late 1700s. There was a weapon ban in Okinawa at this time, so people had to come up with system of self defense that used empty hands – they combined aspects of Chinese martial arts with the Te traditional to Okinawa. By the early 1900s it began spreading throughout Japan. In 1964, the Federation of Karate Organizations was formed as a means to create some continuity for Karate world-wide. Even so, there are many different styles and variations of Karate.

Karate is a linear martial art. It uses a wide variety of movements: kicks, punches, blocks, strikes, evasions and throws. Training focuses on having a strong offense and puts equal importance on the three areas of the art: basics, sparring and form.